Causes of Inflation in US (A different perspective)

Where do we stand on inflation

The past few years have been a roller coaster ride for the global economies with COVID-19 pandemic creating enormous challenges throughout the world, in addition to deaths, hospitalizations, and various long-term health impacts, significant economic damage also occurred in COVID’s aftermath. Here in the United States, inflation continues to challenge businesses and consumers. Annual inflation rate touched the highest in June 2022 at 9.1% and then eased for a second straight month to 8.3% in August of 2022, marking the highest level of inflation since the 1979 oil crisis.

As businesses, particularly many goods-producing firms, received fiscal stabilization funds such as the Paycheck Protection Program, the firms not only received support to keep existing employees on the job, but began searching for additional employees as demand dramatically increased, spurred by consumers flush with cash. This economic activity initially stabilized and then increased. As households received unemployment insurance compensation and economic stimulus payments, this increased personal income in the second quarter of 2020 by 8% over the prior quarter and by nearly 11% over the prior year as shown in the figure below, 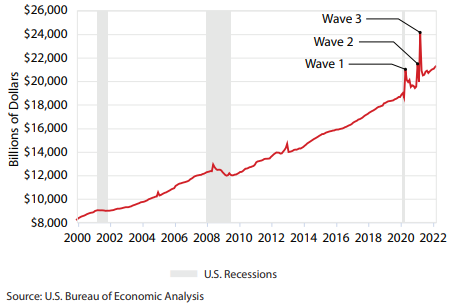 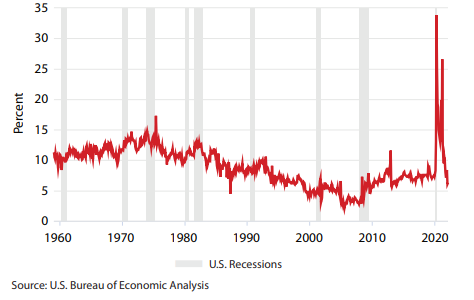 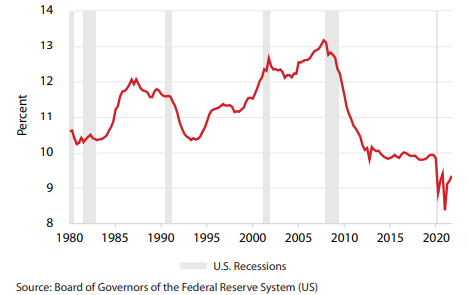 Although there has been a drop-in personal savings rate in the aftermath of the fiscal stimulus in the periods of rising incomes, however a sizeable number of savings and a room for financing consumption through debt (less likely due to monetary tightening) as considerable amount of income was distributed to debt servicing. The timing of households spending these savings and debt remains uncertain, increasing uncertainty about the economic outlook and potentially contributing further to inflationary outlook, however while savings are a one-time funding source, these debt reductions create future ongoing spending capacity. Household spending re-focused on goods because many services remained heavily restricted. This renewed goods focus, including on remote sales as shown, these goods re-focusing caused a large retail sales increase. 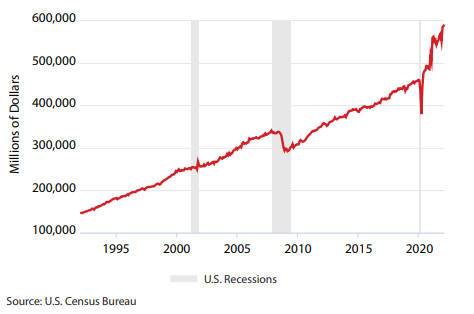 The most prominent short-term impact is that the fiscal stimulus has contributed to current inflationary challenges, with U.S. consumer inflation spiking to levels not seen in over forty years 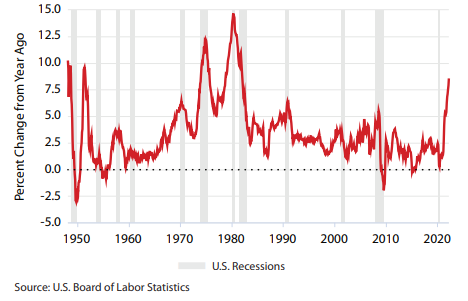 While many factors likely contribute to the price spike, including pandemic-specific impacts (such as supply chain disruptions and labor shortages), large-scale fiscal stimulus is a major contributing factor. Initially projected to be transitory and closely related to pandemic specific factors, sustained and accelerating consumer price inflation has raised significant concerns about long-term inflationary pressures if a wage-price spiral occurs, in which workers demand higher wages, which firms then pass on to consumers through higher prices which indirectly increased income and consumption. As incomes and spending grew, so did inflation.

“The Fed’s delayed inflation response was a mistake” former Chair Ben Bernanke commented, one of the many renowned economists to come forward and criticize The Fed’s slow response to the crises,
Federal Reserve’s monetary policy has been the most used economic stabilization tool in prior recent recessions, however since many economists predicted a great depression like economic recession for the economy due to the pandemic sending shock waves to the drivers of the government leading to massive expansionary fiscal and monetary policy, which lead to the stabilization and recovery from major economic disruptions of the Covid-19 pandemic.
As can be seen from the figure below, Feds response was swift in responding to the crisis with a sharp cut in base rates by 150BP in March 2020 to 0-25 BP levels, 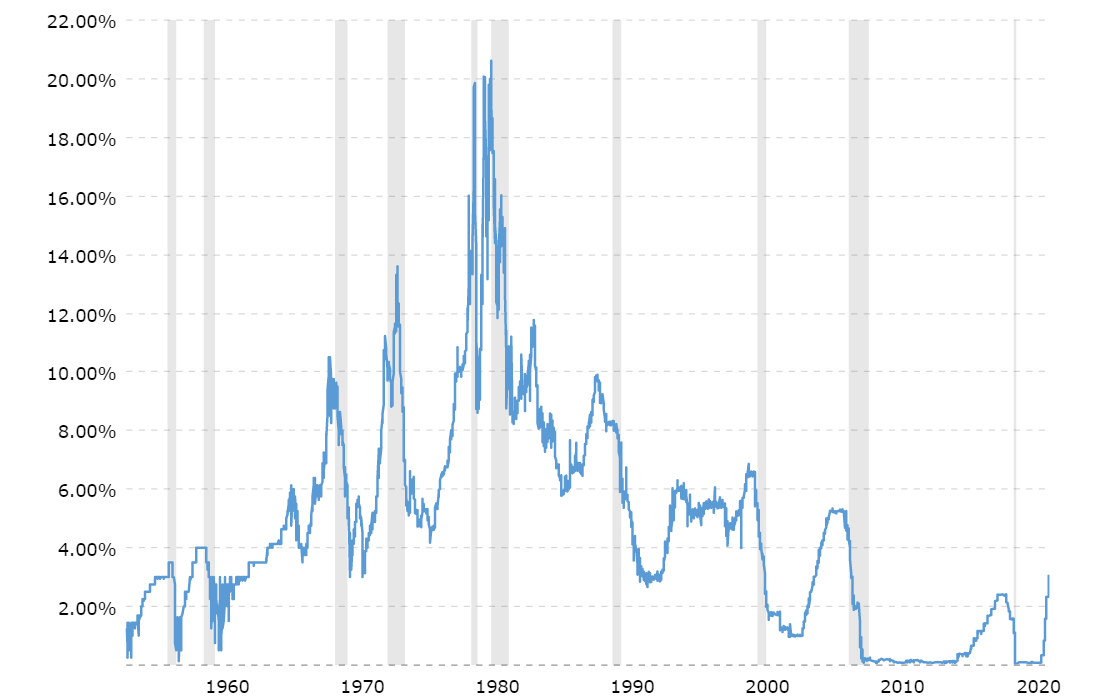 Fed not only had a cut on interest rates but through its open market operations purchased Treasury and agency securities in the amount as needed. Expanded overnight and term repos. Lowered cost of discount window lending. Reduced existing cost of swap lines with major central banks and extended the maturity of FX operations; broadened U.S. dollar swap lines to more central banks; offered temporary repo facility for foreign and international monetary authorities.
Federal banking supervisors encouraged depository institutions to use their capital and liquidity buffers to lend, to work constructively with borrowers affected by Covid-19 and gave relaxations to banks lending in the pandemic.

An expansionary monetary policy along with an expansionary fiscal policy coupled with Supply chain disruptions due to blockage of Suez Canal, led to extensive money supply in the market leading to a high level of inflation and as inflation in its simplest terms can be defined as “Too much money chasing too few goods” so a disruption in supply chain, excess of money supply through fiscal stimulus and monetary policy caused inflation and what should have triggered an automatic stabilizing response by Fed to raise the base rate to cater inflation were too slow to recognize this inflation crises and to do anything about it.
The Fed rate of 0.25% for most of the pandemic leading out to the Year 2022 has been mostly negative real interest rate that further fueled the inflation crisis, a response from Fed by a meagre rise in policy rate comes in March 22 with a rise in 25 BP to 0.5% while the inflation has been well over 5% for the last whole year.

The CPI inflation in the same time frame has been way higher leading towards negative return for the investors, Former Fed Governor Kevin Warsh added that “Fed’s response has left me puzzled, they had pro-inflationary bias even when asset prices and consumer prices were increasing, an increase of 25 to 50 bps is not enough when inflation is rising at higher pace”

However, there can be numerous reasons to explain the cause of a Fed’s slow response, which can be listed down as

Further on these factors during the pandemic has caused FED to misread the economy to the point that inflation has risen to levels not seen in 40 years, 2 Quarters of negative growth for the US Economy and a commentary by the leaders that we are seeing a recession.

We believe that there is still room for an increase in the FED rates over the next Monetary Policy Committee meeting and a stabilization in the market will occur at around 5% to 6% which might stay there for a while.

The drop in sentiments in 2022 has got the economists worried and FED is very focused on convincing people and like Jay Powell Chairman of the Fed saying “He is going to get this under control because he doesn’t want people to think that inflation is here to stay” He has been working on creating an impression that general public sees Fed being very likely to be successful in getting inflation down to 2%.

So why are consumer sentiments important for the economy? Due to the potential of self-fulfillment when it comes to inflation, people think that the inflation is going to get worse in the future they might start stockpiling and buying more now if they believe prices are going to go up in the future and if they front load their consumption and bring their future consumption into present, that is an increase in demand, increasing prices by itself as the market price shifts upwards due to a shift in demand with a constant supply.

Consumer Sentiment index as released by University of Michigan showed a modest increase in consumer sentiment for the month of Sept 2022 at 58.6 compared to 58.2 however a Year on Year fall of 19.5% in the consumer sentiment shows that the confidence on the economy is low for consumers. 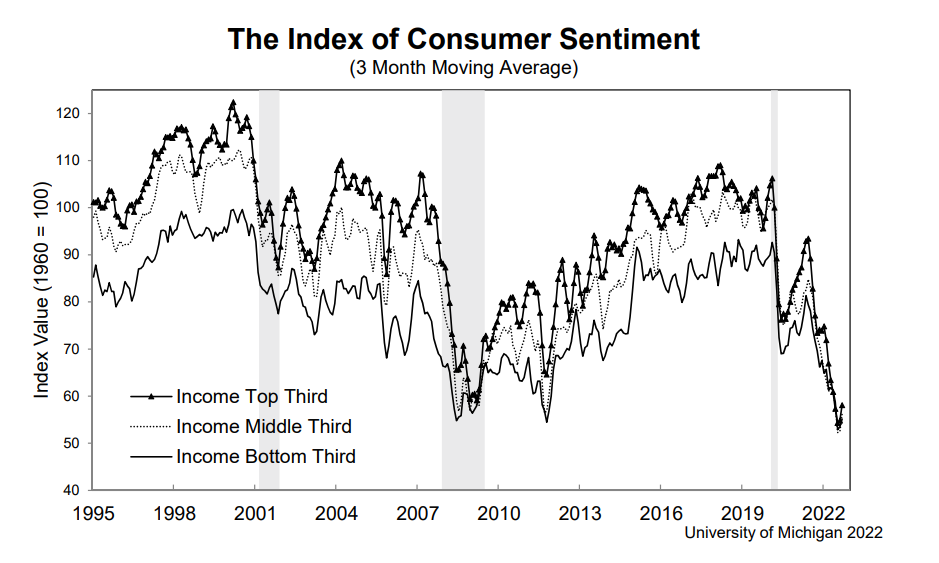 According to McKinsey & Company, when asked about the top three concerns of the consumer’s mind, 65% of the respondents were worried about the rising process, far outweighing other political, economic or personal concerns including Covid-19. However, the response varies with different age groups – for baby boomers and Gen Xers, inflation is the higher concern, same goes for 55% of millennials. Gen Zs however believe personal and political topics are on top of their concerns alongside inflation. 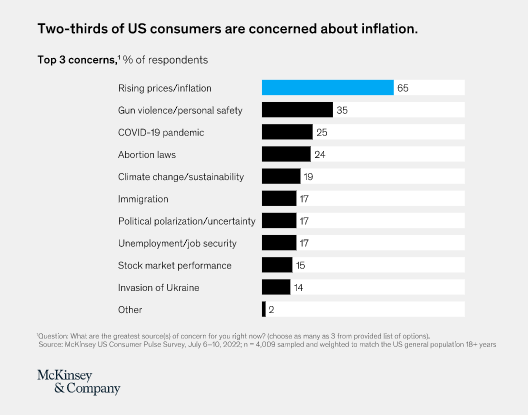 Inflation is affecting the behavior of consumers. Almost 44% people are depleting their savings or reducing the amount they used to save every month. 18% are charging to credit cards, another 18% are not paying their bills in full. 13% are trying to make extra income by doing more than one jobs. 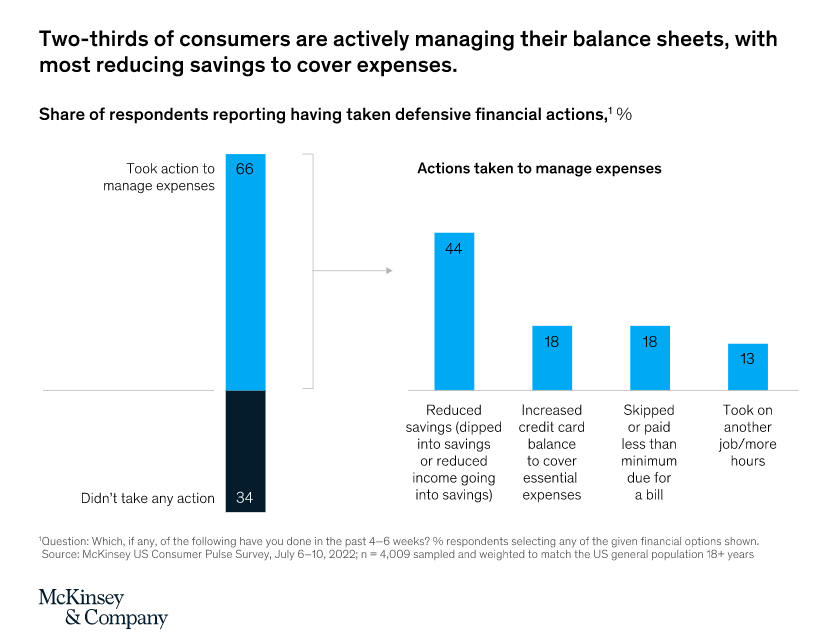 Jay Powell now just doesn’t need to lower inflation but needs the pubic to feel confident about it as well, and he is out there to convince markets and the consumers that he won’t let it worsen.
For now, uncertainty still looms in the air and organizations need to remain agile to sustain any further unexpected shocks.